Your Competitors Are Not Who You Think They Are – Lessons from JD Prater, Head of Product Marketing at AWS Activate

In this edition of ‘Competitively Enabled’ , we spoke with JD Prater, Head of Product Marketing at Amazon Web Services (AWS) Activate and host of the Thrills and Chills Podcast.

From teaching in Cairo to leading product marketing at an enterprise company, we dive into JD’s journey. We get into the importance of creating the right messaging for sales, how he identified direct competitors as a competitive team of one, and the attributes that lead to success in product marketing.

Navigation
1. Stumbling Into The World of Product Marketing
2. The Keys to Success in Product Marketing: Adapting and Understanding What Influences Revenue
3. Identifying the Right Competitors With a Competitive Team of One
4. Why Enabling Sales is a Critical Part of the Competitive Function
5. Creating a Community: The Thrills and Chills Podcast

Stumbling Into The World of Product Marketing

When JD stepped off of the plane on the other side of the world from his hometown, the first thing that hit him was the hot, dry Egyptian air. The second was the sheer number of people he was surrounded by.

“My hometown is thirty thousand people, and then I suddenly move to a city of 20 million people! It was eye-opening.”

Product marketing was never on JD’s radar. Growing up in Oklahoma and attending a university that was heavily agriculture-focused, business and marketing rarely crossed his mind.

In fact, teaching was his first passion.

“I wanted to be a history teacher at the high school level,” said JD. “I was really into Middle Eastern politics and US foreign affairs.”

One of JD’s professors had attended the American University in Cairo, wrote him a recommendation letter, and next thing he knew JD was on the other side of the world studying and teaching in the heart of Egypt.

Although a career in teaching was short-lived, unbeknownst to him, JD’s schooling prepared him for the world of product marketing.

Now back in the United States, JD’s first marketing role came about because a non-profit company, American Farmland Trust, needed a young guy ‘to tell them about what is the Twitter and what is the Facebook’.

However, as he went through different types of marketing, from engagement to performance to demand generation, JD realized that he enjoyed and excelled in the strategic areas that focused on messaging, positioning and enabling sales, and working with competitive intelligence.

“And guess what? It turns out the role is called product marketing!”

The Keys to Success in Product Marketing: Adapting and Understanding What Influences Revenue

One of the first lessons that JD learned when taking on the Head of Product Marketing role at Quora was the value of adaptability.

“Coming into Quora, they were very product, engineering, and design-focused. Marketing was just ‘over here’ and the company was product-led, but to the detriment of having no marketing.

It was a different type of organization, and I had to be able to adapt and show our value.”

The best way to show value? Understanding what will influence revenue at the company.

“When you know what levers you can pull to really help, whether that’s through enablement or influencing metrics, that’s how you’re ultimately going to be seen. If you can help influence revenue, then that’s how you get more headcount and how you’re going to get resources.”

Although product marketers have to be adaptable to their surroundings on a day-to-day basis, the overarching problems that they’re solving are the same regardless of what product is being marketed or the size of the company they work at.

“Anything from a Series A start-up to a huge public company, the problems remain the same. How do we talk to our customers? How do we position ourselves against competitors? What are our value propositions and how can we make them stick? How do we get that to help our sales team or bring this information back to the product team?”

Identifying the Right Competitors With a Competitive Team of One

When JD came into his role at Quora, he was also tasked to lead competitive intelligence at the company. That’s no small feat for a business who was in the process of launching an ad platform that would compete with Google and Facebook.

“Google are always releasing something. It’s the same with Facebook… so it was tough to hone in on what they have and how that compares to what we have.”

However, the more JD researched, the more he realized that Google and Facebook weren’t actually their primary competitors. His company didn’t have a clear idea of their customer fit.

“I had to understand who the ideal customer profile (ICP) was, because I want to reach more of them. There was a lot of information in the CRM, but no one was digging and surfacing the insights to understand who our best-fit customers are.”

After getting a far clearer picture through this research, JD then turned to their customers to get direct feedback.

“I’d ask ‘you’re placing budget, we know that Google and Facebook get 60-70 percent of your ad spend. What are you doing with the other 30 percent? How do you evaluate us and who do you compare us to?’

It was quick. They all said ‘Reddit and LinkedIn’. Boom. I don’t need to go up against Facebook or Google, I just need to position against these competitors and explain why we’re a better experimental platform.”

A small product marketing team like JD’s has a limited number of bullets in the chamber. By doing deeper research on who they were really up against, Quora prevented firing away at bigger competitors that weren’t actually impacting their revenue on a deal-by-deal basis.

Why Enabling Sales is a Critical Part of the Competitive Function

One of the biggest competitive challenges that JD faced?

“I would say housing that competitive information was always tough… and the training piece of it, being able to train the sales team.”

Without unlimited headcount or resources, it became clear that JD had to prioritize.

“I had to think, what is the most important thing for me to do? Well.. all of it. You end up playing to your own strengths, but that also means something has to give whenever you’re a small team.”

With this in mind, JD focused on an area that played to his strengths AND helped the business, which was enabling the sales team to position themselves.

“I like the messaging and positioning rather than putting everything we collect into a spreadsheet to create some sort of grid.”

There is an infamous tension between product marketers and salespeople when it comes to messaging.

Salespeople are going rogue and aren’t following my messaging… well, the PMMs aren’t in the field and they aren’t in touch with reality.

In order to alleviate that tension, JD decided to get as close to ‘being in the field’ as possible.

“Product marketers need to be pitching. You need to pitch to customer advisory boards and find out ‘how does this land, and does it sound right’?

You also have to attend sales calls if you can, even in the background. If you can’t do any of those and they’re recording them… then listen to the sales calls and see if they are using your messaging? How is it landing? What questions are being surfaced based on it?”

Taking that time to be aligned with sales and getting as much contact with customers as possible helps create a far tighter messaging narrative. But it isn’t perfect forever.

“At Amazon, they say that everything is a living doc. That’s just the mentality. It’s not a set it and forget it deal. It’s a set it, test it, iterate, fine-tune, release, train, feedback. It’s a process and this process is never-ending.

It’s about weaving everything into a narrative that makes sense in your customer’s mind.”

Creating a Community: The Thrills and Chills Podcast

Oftentimes, product marketers are a team of one at their company. Although you’re the connector that links sales, product, marketing, and customer success together, it can be an isolating position.

“What I found was it’s a really lonely space when you’re the first marketer and don’t have those answers. You’re just so hungry for knowledge, but you’re also seeking that connection and validation.’”

This is why JD decided to start the Thrills and Chills podcast with Sharebird.

The show brings in product marketers from B2B and B2C companies, from UberEats to IT software, to share an inside scoop of what it takes to be a product marketer and the highs and lows of the job.

Although it’s focused on the marketer rather than the marketing, JD knows that listeners will pick up new tactical insights along the way.

For example, in a recent episode, JD and Jeffrey Vocell walk-through what their product marketing role looked like as their company earned Series A funding and began rapid-growth.

In another upcoming episode, JD’s guest dives into what it takes to create an entirely new category and the rationale behind diving into such a big endeavour.

“You will get that piece of not feeling isolated, but I’m hoping that you also walk away with a decent playbook.” 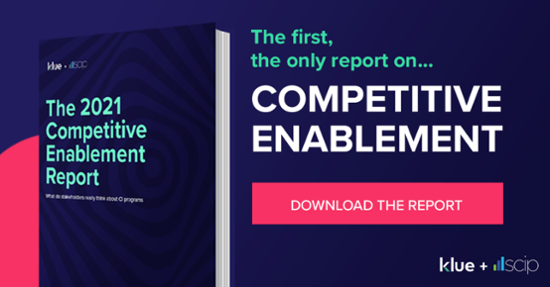 The Three Most Essential Skillsets For Your Competitive Enablement Program

For Klue’s Competitive Enablement Series we’ve interviewed both leading competitive intelligence professionals and consumers of competitive content. We get an inside look at what goes…

The 10 Biggest Takeaways from the 2021 Competitive Enablement Report

Wouldn’t it be nice to know exactly what your stakeholders wanted from your competitive enablement program? A little truth serum, perhaps? Well, we decided to…

Watch a Webinar about Klue.

Watch a quick video about Klue.

It's like a demo but without the human interaction.