A Sneak Peek of our 2021 Competitive Enablement Report

In order to build a competitive enablement program that wins, it requires enabling the entire org with competitive insights. But what do all of these stakeholders really want?

Instead of guessing, Klue decided to ask them. We partnered with SCIP and talked to over 500 CI professionals and stakeholders across 18 industries in the first-ever Competitive Enablement report.

The results? A cheat sheet of everything you need to know to level up your competitive enablement program in the new year. Here are three of the most eyebrow-raising findings from the report, just to wet your appetite for the real thing.

Can’t wait? Get first dibs on the report here.

Eyebrow-raiser #1 – 79% of stakeholders do their own competitive intelligence research (yes, even when there’s a CI function in their org). 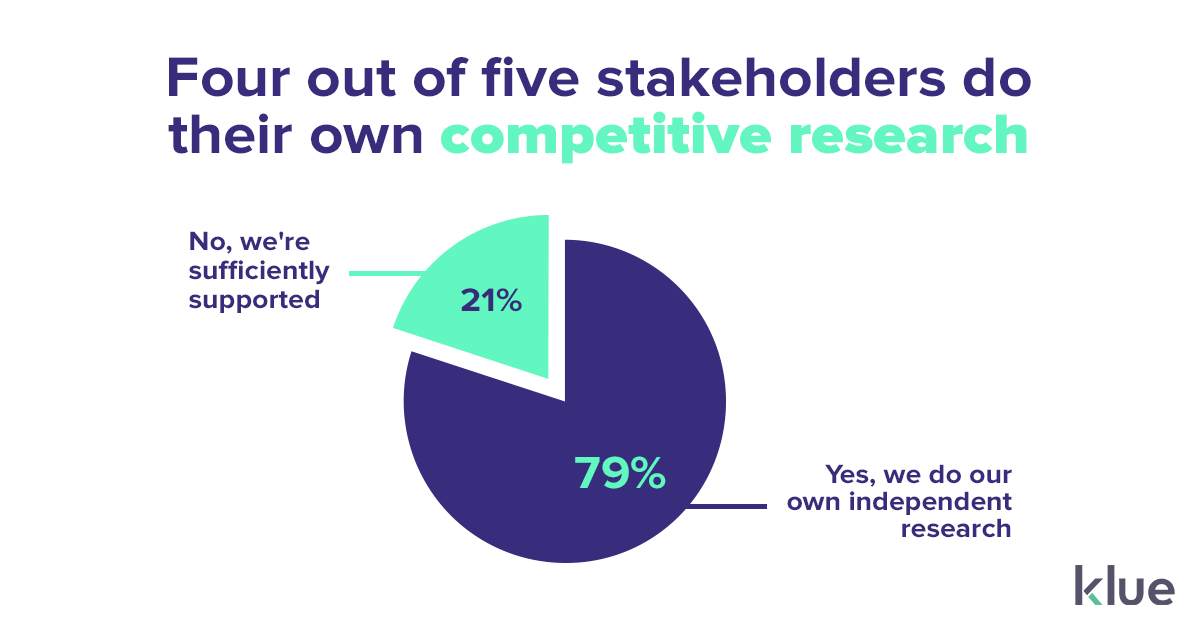 Although it’s the role of competitive enablement teams to manage competitive intel, nearly four out of five stakeholders mentioned that they conduct their own independent competitive research. Barely 20% of respondents feel sufficiently supported by competitive intelligence. Yikes.

So, why are they doing this? There are two main reasons.

First, over 40% of stakeholders stated that they are primarily responsible for competitive intelligence within their own region or business unit. This is an unfortunate reality for competitive enablement teams that don’t possess the headcount or technology to be a centralized group that serves every region or business unit across the organization. Instead, competitive insights are locked away in different pockets of the company.

Even more concerning is that 34% of stakeholders are doing their own competitive intelligence research to augment the findings provided by their CI teams. Simply put, the insights they receive aren’t sufficient enough to enable stakeholders in their roles.

Call us curious, but we wanted to know… why do stakeholders feel the need to go deeper beyond the insights they’re currently being provided?

Eyebrow-raiser #2 – Stakeholders are doing their own research because they aren’t accessing relevant competitive intelligence, quickly. 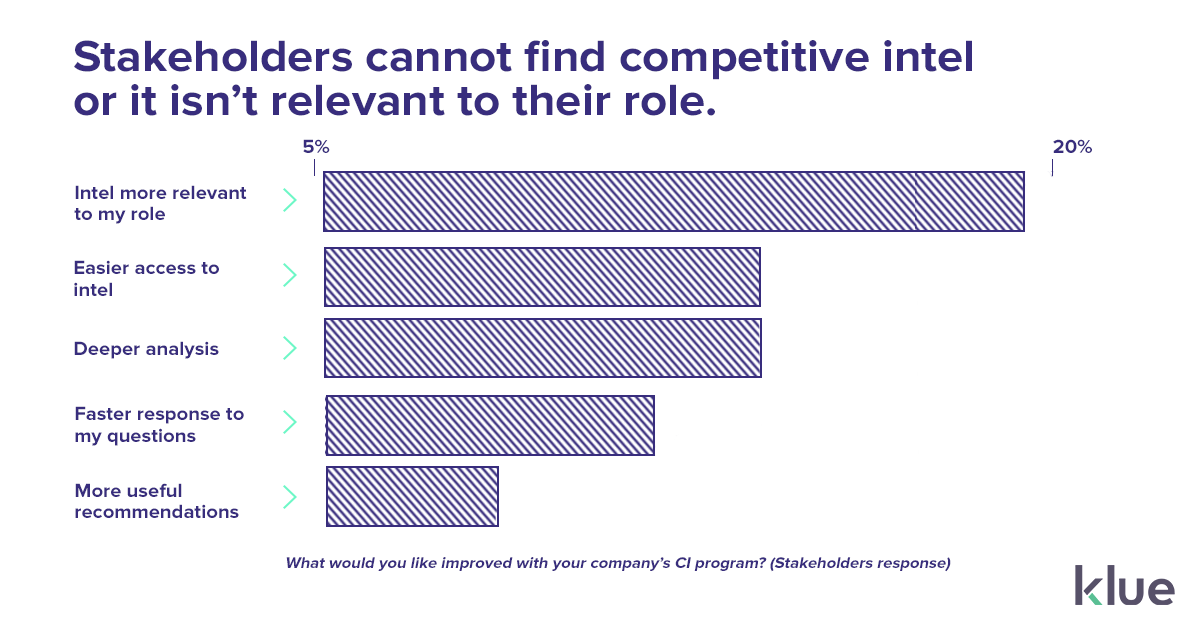 When we asked stakeholders why they conducted their own competitive research, two clear reasons stood out:

The intel that stakeholders are receiving isn’t helpful enough for many reasons. First, insights aren’t relevant to their specific role (18%), and therefore can’t be used. Competitive enablement teams simply dumping all of the insights onto the table and expecting stakeholders to be able to find the competitive intel they specifically need to be successful isn’t an effective method. And stakeholders are frustrated; another problem they highlighted was that there aren’t useful recommendations (9%) attached to the insights provided. If competitive intel has context attached to it – who is it relevant to, and how they can use it – then the barrier to using this information becomes significantly smaller.

Another area in which stakeholders felt the insights weren’t helpful was because it needed deeper analysis (14%). Jenna Dorman, VP of Strategic Accounts at Alida, expressed that this is a common occurrence for salespeople:

“There’s always going to be that basic information as you see a competitor more frequently in the field and grow your learnings on that competitor. How do you capture that information and make it richer? Oftentimes the information that is presented is the bare minimum.”

The other main reason that stakeholders took competitive research into their own hands is because the existing intel is too hard to find. Many expressed that without self-service access to a central repository  (14%), it became far too time-consuming to find the insights they needed in the moment. Instead, information is spread across various docs, slides, and Slack threads, collecting dust.

Similarly, stakeholders struggled to access insights because they need faster responses to their questions (12%). Information is shared too sporadically and competitive enablement teams aren’t replying quickly enough to specific requests.

Eyebrow-raiser #3 – Competitive teams and stakeholders disagree on how they should help the business.

We asked both stakeholders and CI professionals what they thought was the greatest benefit that competitive intelligence brings to the business. The results show that they aren’t really on the same page.

CI professionals perceive improving executive strategy and alignment (17%) as their most important contribution. 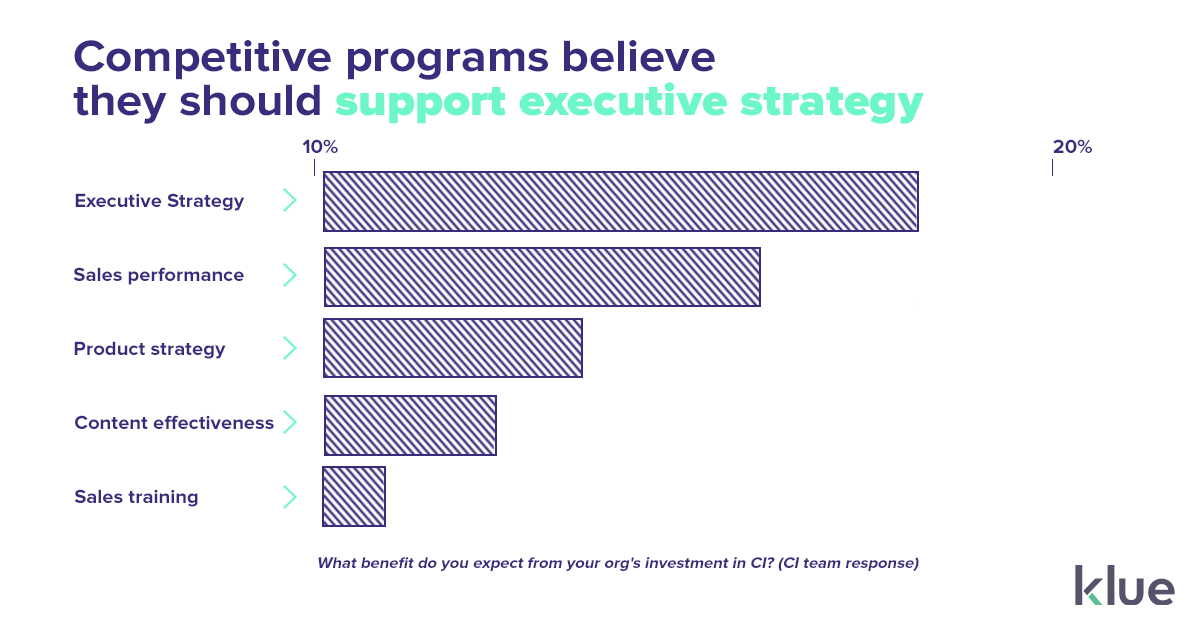 However, stakeholders would prefer their focus to be on revenue enablement such as improving sales performance (18%) and customer retention (14%). 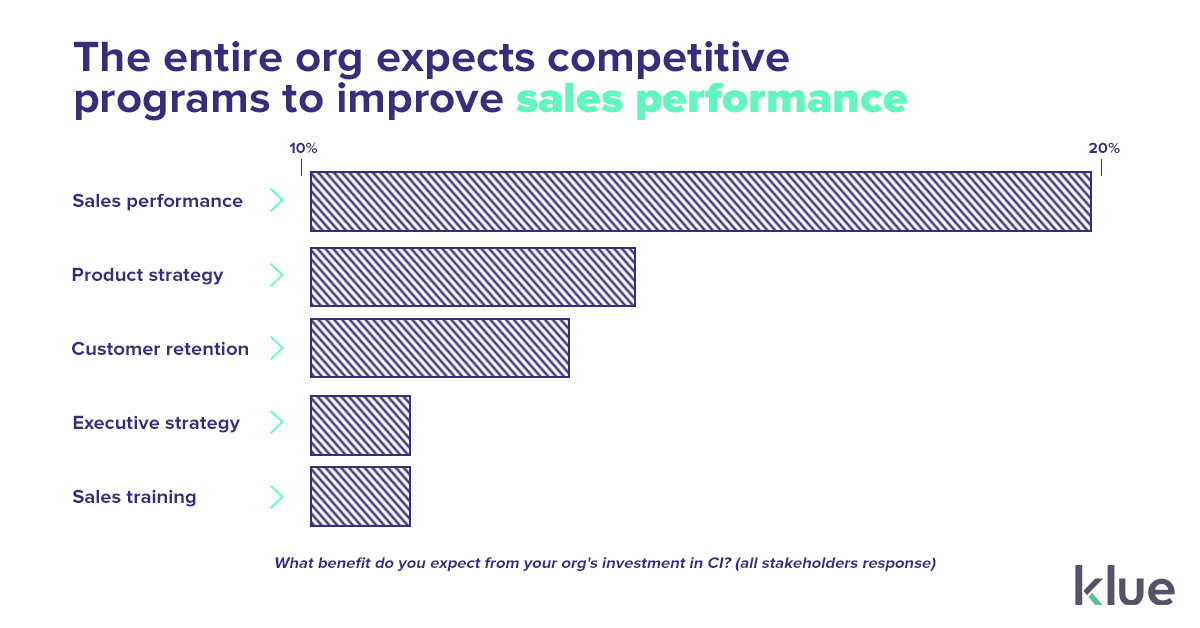 Although they are misaligned in their responses, the relatively even spread of answers from both sets of respondents may also indicate something else: competitive intelligence is valuable across nearly every area of the business.

However, the strategic ‘big picture’ competitive insights CI professionals are focus on that are provided for executives aren’t as applicable to other departments. It’s utility to stakeholders is more limited than tactical insights that enable the sales team to proactively lay a landmine on a competitor, or the messaging and value propositions that need to be shared with an at-risk customer that’s determining whether or not to renew.

We promised we’d go deep on this Competitive Enablement report, so we didn’t just stop there. We also asked the C-Suite what benefits they expected to see from investing in competitive intelligence. And, spoiler alert, their number one priority was different to both stakeholders and CI professionals.

Your Competitors Are Not Who You Think They Are

JD Prater, Head of Product Marketing at AWS breaks down how to identify your direct competitors, and create messaging that enables sales.