New rivals popping up from all corners is an inevitable part of today’s landscape. With this also comes plenty of new ways to swat them away.

Gone are the old days of competitive intelligence programs merely collecting intel that occasionally gets used by sales. Modern competitive programs should enable every department across the organization with actionable insights.

Now, it’s all well and good talking about competitive insights, but let’s see this stuff in action!

We have put together eight of the most effective competitive intelligence examples businesses are using to get a leg up on their rivals.

One of our clients in the software industry was in the beginning stages of building out their competitive intelligence program. The team’s biggest pain point was that they weren’t sure who to focus on as competitors.

In order to figure out who they should be keeping tabs on, the client started tracking some initial sales data:

Using the deal data trends, they noticed an emerging competitor popping up in deals which the sales team had minimal knowledge of. This unexpected turn put immediate stress on the business.

However, it also proved to be a light bulb moment that gave their competitive intelligence efforts more direction. With this discovery, they targeted researching the new competitor and began to enable their sales reps so that they were no longer getting blindsided.

Check out how Tracy Berry began to discover the goals for her newly implemented competitive program when talking with key stakeholders. You can watch the entire webinar here.

2. Lean on your sales team as a source of competitive information

Tapping into the intel that the sales team receives on calls with prospects is an underutilized method of gathering critical competitive information.

They often get a direct window into a competitor’s offerings during the sales process – information that is invaluable beyond the immediate deal at hand.

One client recognized that their salesforce wasn’t effectively capturing and sharing competitive intel across the team. Sure, their competitive team was gathering public information, but they needed deeper insights – ones that could only come from the field.

In order to improve this, they created a friendly competition between the North American and EMEA sales teams. Whoever shared more competitive insights to their competitive platform from calls would earn a teamwide reward.

This method was a win-win.

By tapping into the competitive nature of their sales teams, information silos immediately began to open up and far greater amounts of competitive insight were being submitted for company-wide access. It was also effective in making the salesforce active participants in the competitive process, an obstacle that many competitive intelligence programs face.

The company simultaneously improved the quality of their intel and got an entire department to champion the value of competitive intelligence.

3. Demonstrate the value of competitive intelligence to every team

The most disheartening result for a competitive team is when all of the hard work you put into creating competitive insights goes unused. The keys to beating your competitors collect dust sitting unread in an inbox, PowerPoint slide, or word document while another deal goes over your head.

Here’s a competitive intelligence example that shows how one client made a small tweak to their distribution practices that got departments to care about the intel they gathered.

Previously, they shared weekly email digests to the whole company with a vast amount of information. However, that was the issue; it was too vast.

A collection of news articles would be dumped into an email with no context, relying on every employee to read each article and understand why it was important.

It was an inefficient process that became a major pain point. There was no explanation as to why the information mattered and to whom it mattered.

With a new intel digest format, the client prefaced articles or links with a few succinct lines explaining the story and why it was important. They then added specific notes to each piece of shared intel, noting how the sales teams could leverage it in conversations with prospects.

Taking that extra step to lower the barrier of entry for employees with competitive intel was a simple, yet effective way to improve usage across the organization.

4. Encourage all departments to engage with competitive intelligence

One of our clients set about building a competitive intelligence program that would generate high-levels of engagement across the organization. In order to do this their curator set up three plans of action: As a result, all teams across the organization immediately began to engage with the competitive intel at a far higher rate. Departments are now frequently checking in to their competitive platform for strategic insights.

5. Be proactive to identify your competitor’s next strategic move

Innocuous pieces of competitive intelligence can often be more impactful than it seems at face value. Piecing together smaller trends may uncover a larger strategic play.

One of our enterprise-level clients began to notice their primary competitor appearing more frequently in news and events. With this in mind, they decided to actively track these events that their competitor was attending for further insight, and a trend emerged.

Despite their competitor’s client base traditionally being small-to-mid-sized businesses, the events they began to sponsor were skewed toward an enterprise-level audience.

This wasn’t a mistake; their competitor was making a push towards pitching larger clients, however, this proactive insight allowed our client to be prepared for this strategic shift.

One of our clients used competitive intelligence to determine their content marketing strategy. Prior to doing so, they were simply driving blind.

Their biggest pain point was that they were being outranked by competitors on keywords related to their industry, causing them to lose out on valuable organic traffic. Because of this, they ran an analysis of each keyword that their competitor ranked highly on and the pieces of content related to these terms.

They discovered that there were only two to three key content pieces that were ranking highly on several keywords. Aha!

Now knowing what pieces of content they had to beat, our client found knowledge gaps in the content where they could differentiate themselves on a topic. The pieces were also easy to beat — short, vague, and containing very few images or other media.

This information gave them the roadmap needed to outrank their competitors. By creating better content on these few topics and following SEO best practices, the marketing team cut into their competitor’s dominance on search engines.

In order to best position themselves to potential candidates, the organization ran an analysis of themselves compared to the other tech companies that they were battling for recruits.

They ran win-loss interviews with candidates that chose to join them and those that decided on other opportunities in order to understand their strengths and weaknesses. With this knowledge, they were able to identify their own competitive approach – asking discovery questions early in the recruiting process to identify their competitors, talking points on how to position their key strengths, and de-positioning tactics to use when recruiting against their key competitors.

These competitive strategies are used in the same way battlecards are by sellers, to maximize recruitment performance and to improve their candidate-to-close ratio.

One of our clients, a fast-growing B2B SaaS company, tripled its sales reps over the past year. One of the biggest challenges this presented was ramping their sales hires onto their own products, and making sure that they understand how these products are positioned in the market.

They built battlecards that helped arm sales reps to handle competitors, and also to prepare them to accurately speak to their own products. By having these clearly defined battlecards, it was easier to progressively ramp up a massive number of new sales reps and ensure that they were all on the same page. 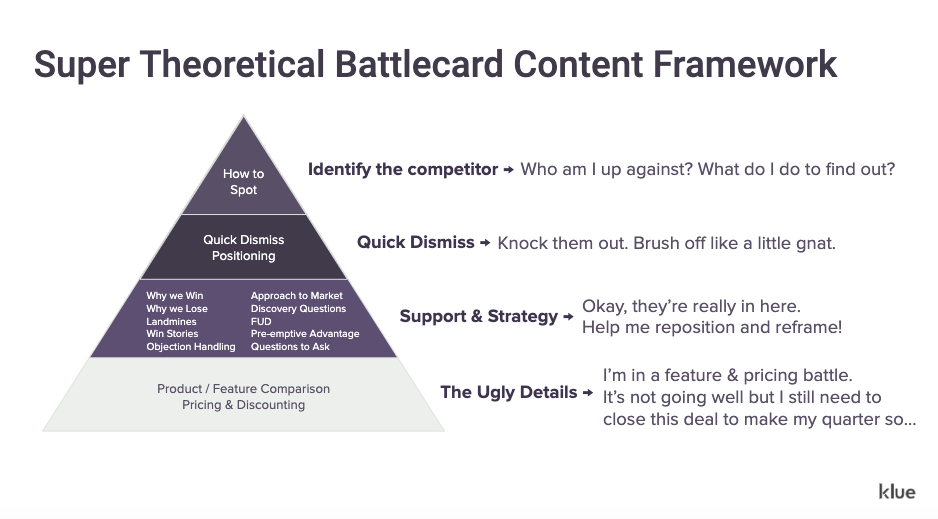 These competitive intelligence examples are just scratching the surface of the endless ways that a CI program can be used to specifically address the needs of your company. Don’t let the unknowns about a competitor remain undetected.

Your Competitors Are Not Who You Think They Are

JD Prater, Head of Product Marketing at AWS breaks down how to identify your direct competitors, and create messaging that enables sales.