How To Use Glassdoor To Gather Competitive Intelligence

Glassdoor is the go-to website for job seekers to snoop on their prospective employers because well, you can’t hide anything behind a glass door.

Which also happens to make it the perfect place to gather competitive intelligence on your competitors.

So can you learn from the encyclopedia of salary expectations and reviews celebrating what type of coffee your competitor has in their office? Is any of this useful to know when you’re competing against them head to head?

We tried it for ourselves to find out.

We picked a standard B2B SaaS company (we won’t say who) and searched them on Glassdoor to see what we could find.

The results? Well, a surprising amount of intel if you scratch beneath the surface.

The first glance at a Glassdoor profile is a whole lot of numbers. Here’s the low-hanging fruit. 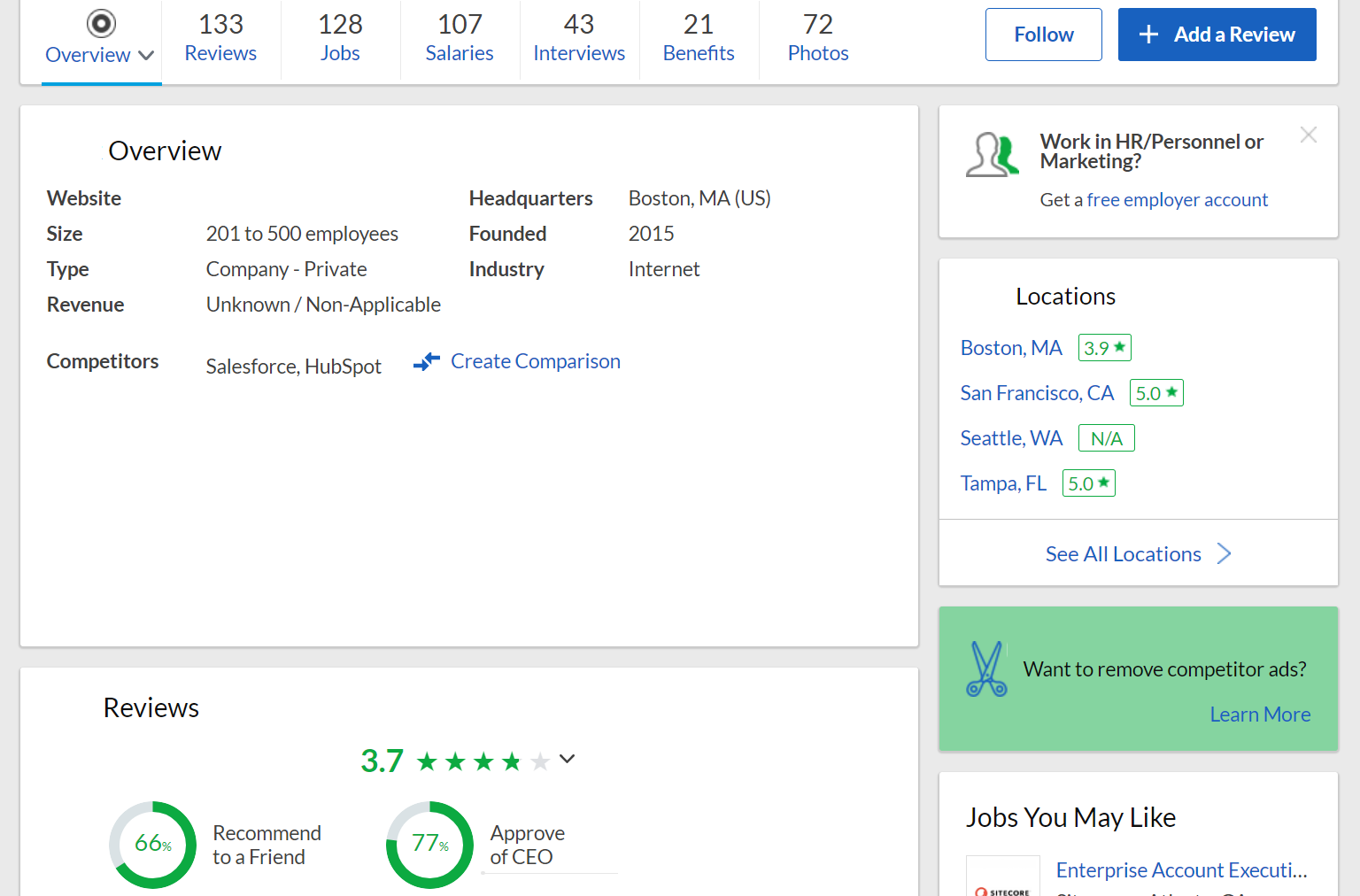 These immediate insights are a quick snapshot of who your competitor is. The size of the company, where they’re located, and their accolades are important tactical insights, but it is high-level information that you likely already know. Sure, those are handy details for a company overview battlecard, but it isn’t what drives a winning competitive intelligence program.

The more important competitive intelligence we are looking for is the hidden gems that can tip you off to a competitor’s strategy, strengths, weaknesses, and future plans. Trust us. They’re there.

Look for trends in Glassdoor reviews

Tracking reviews on Glassdoor is not an exact science. People tend to only leave reviews after especially positive or negative experiences, which portrays a polarizing image of a company. As readers, we tend to wrongfully emphasize the few negative reviews that stand out. The New York Times noted that online reviews are not only subjective and small in sample size, but that reviewers themselves aren’t representative of the typical workforce.

The moral of the story? Don’t put too much stock in individual reviews, good or bad. A single scathing review attacking the CEO’s character, or one that talks about the quality of the company coffee beans should be taken with a grain of salt.

Instead, look for real trends. A company’s average star ratings offer basic satisfaction benchmarks, but from a competitive intelligence perspective, it is more important to look for common themes as to what is being said about them.

Quantifying qualitative feedback on reviews has become significantly easier since Glassdoor adopted its ‘pros and cons’ feature in January 2020. This groups together common key phrases that are associated with positive and negative reviews: In our research, we found the expected employee-centric responses about work-life balance and free lunches, however we also caught a glimpse into the company’s operations.

One thing these reviews commonly noted is the understanding that the company is well on its way to having its IPO (Initial Public Offering). From a competitive intelligence lens, this means company shares will be available to external investors, which dramatically shifts how the business operates. An anticipated influx of cash can be used to launch even more products, bolster departments, move upstream to target larger companies or expand their reach in different geographic markets.

Although you can’t rely solely on opinion-based feedback when it comes to gathering competitive intelligence, these sentiments have their place. For example, the common theme of the business being ‘fast-paced’ and the ‘growing pains’ are useful when we combine that with the knowledge of the impending IPO. This supports the idea that the company is heavily focused on growth moving forward. Boom. Competitive intel.

We also noted that they explicitly mentioned both the quality of the leadership team and the effectiveness of the designers. This source of competitive intelligence isn’t something that can be used tactically in deals, however, it provides another layer of insight into where the company’s strengths may currently lie.

When looking at job postings for the purpose of gathering competitive insights, it requires looking at trends you may notice in the departments they’re hiring in, the executive-level openings, and the location of these jobs. Job postings can tell you a lot about the direction the company is heading in, and its timelines. Look at what department they are hiring in. Are there executive-level openings? Are there mostly product positions available? Sales roles? Look at the time of posting and the closing dates. Cross-referencing these postings with their company directory to see WHO they are hiring can teach you a lot about what their go-to-market strategy might look like.

Going back to our example, the information that commonly appeared in employee reviews revolved around the company’s continued growth. With this in mind, we looked at their job openings to gather more competitive intelligence on where and how they may be attempting to build.

What immediately popped out when browsing through their 127 job openings was the inclusion of ‘enterprise’ in many of the company’s job titles. Currently, 16 of their postings are specific to enterprise at the mid to senior-level positions.

So we dug a little deeper and looked at the publicly available data on their current customer base (an easy find if you’ve got an Approach-to-Market battlecard).

What do you know? The focus on enterprise employees didn’t quite line up with their current customers. Looking at the company’s G2 profile found that of nearly 500 reviews only 6% are given by enterprise-level clients, whereas 54% come from small businesses and 40% from mid-market.

If the nearly 500 reviews from G2 are reflective of the company’s customer-base, then we have a solid idea that their clients have typically been small to mid-sized businesses. With this knowledge, then seeing an abundance of openings specifically targeted to enterprise may set off alarm bells for some of their competitors that serve bigger businesses.

Beyond the types of customers a growing company may target in the future, another source of competitive intelligence you can uncover through job openings is the geographic markets they are also looking to crack. This was another tidbit that we noticed when looking at their openings:

Despite their website and Glassdoor page stating that their four offices were located in Tampa, Seattle, Boston, and San Francisco, there were several openings based out of the United Kingdom.

The above roles are also all customer-facing positions, not back-end developers where geographic location and the time zone they work in are less important. This could indicate that the company’s growth is not only focused on moving upstream towards enterprise-level clients, but also expanding into the EMEA market. The fact that the job postings are located in London gives us a hunch… officially looking for a Head of EMEA Marketing makes this more of a certainty.

Rapidly growing companies and large enterprise businesses will likely have a lot of job openings to fill. Rather than picking apart each role, an effective method to gather competitive intelligence is by looking for trends like we’ve noticed above. However, if you do want to dive into the specifics of job postings then we suggest that you save that for executive-level openings. These are the roles that will heavily influence a company’s strategic direction and can often provide a few more breadcrumbs that will lead you to your competitor’s next move.

Although Glassdoor may seem like an unconventional way to gather competitive intelligence, reading between the lines of some less obvious insights on the page that we’ve outlined is just another jigsaw piece to fit into the puzzle of figuring out your competitor.

20+ competitive strategists shared their expertise on the most important areas for improving your competitive enablement program.